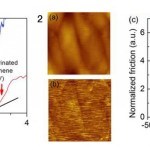 Abstract:
Atomically thin graphene is an ideal model system for studying nanoscale friction due to its intrinsic two-dimensional (2D) anisotropy. Furthermore, modulating its tribological properties could be an important milestone for graphene-based micro- and nanomechanical devices. Here, we report unexpectedly enhanced nanoscale friction on chemically modified graphene and a relevant theoretical analysis associated with flexural phonons. Ultrahigh vacuum friction force microscopy measurements show that nanoscale friction on the graphene surface increases by a factor of 6 after fluorination of the surface, while the adhesion force is slightly reduced. Density functional theory calculations show that the out-of-plane bending stiffness of graphene increases up to 4-fold after fluorination. Thus, the less compliant F-graphene exhibits more friction. This indicates that the mechanics of tip-to- graphene nanoscale friction would be characteristically different from that of conventional solid-on-solid contact and would be dominated by the out-of-plane bending stiffness of the chemically modified graphene. We propose that damping via flexural phonons could be a main source for frictional energy dissipation in 2D systems such as graphene. 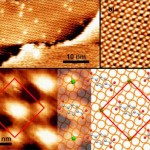 Abstract:
Ionic bonding in supramolecular surface networks is a promising strategy to self-assemble nanostructures from organic building blocks with atomic precision. However, sufficient thermal stability of such systems has not been achieved at metal surfaces, likely due to partial screening of the ionic interactions. We demonstrate excellent stability of a self-assembled ionic network on a metal surface at elevated temperatures. The structure is characterized directly by atomic resolution scanning tunneling microscopy (STM) experiments conducted at 165 °C showing intact domains. This robust nanometer-scale structure is achieved by the on-surface reaction of a simple and inexpensive compound, sodium chloride, with a model system for carboxylate interactions, terephthalic acid (TPA). Rather than distinct layers of TPA and NaCl, angle resolved X-ray photoelectron spectroscopy experiments indicate a replacement reaction on the Cu(100) surface to form Na−carboxylate ionic bonds. Chemical shifts in core level electron states confirm a direct interaction and a +1 charge state of the Na. High-temperature STM imaging shows virtually no fluctuation of Na−TPA island boundaries, revealing a level of thermal stability that has not been previously achieved in noncovalent organic-based nanostructures at surfaces. Comparable strength of intermolecular ionic bonds and intramolecular covalent bonds has been achieved in this surface system. The formation of these highly ordered structures and their excellent thermal stability is dependent on the interplay of adsorbate−substrate and ionic interactions and opens new possibilities for ionic self-assemblies at surfaces with specific chemical function. Robust ionic surface structures have potential uses in technologies requiring high thermal stability and precise ordering through self-assembly. 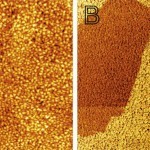 Abstract:
We report scanning tunneling microscopy (STM) and spectroscopy (STS) measurements on single layer Ti0.87O2 nanosheets deposited on Pt(200 nm)/Si substrates. These nanosheets have a band gap of 3.8 eV and are virtually invisible in conventional STM images. However, an impressive contrast is observed in the di/dz map, which allows for a clear identification of the nanosheets. The di/dz signal is obtained by adding a high frequency, small amplitude modulation to the z-piezo using a lock-in amplifier. 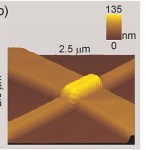 Abstract – Understanding energy dissipation at the nanoscale requires the ability to probe temperature fields with nanometer resolution. Here, we describe an ultra-high vacuum (UHV)-based scanning thermal microscope (SThM) technique that is capable of quantitatively mapping temperature fields with ∼15 mK temperature resolution and ∼10 nm spatial resolution. In this technique, a custom fabricated atomic force microscope (AFM) cantilever, with a nanoscale AuCr thermocouple integrated into the tip of the probe, is used to measure temperature fields of surfaces. Operation in an UHV environment eliminates parasitic heat transport between the tip and the sample enabling quantitative measurement of temperature fields on metal and dielectric surfaces with nanoscale resolution. We demonstrate the capabilities of this technique by directly imaging thermal fields in the vicinity of a 200 nm wide, self-heated, Pt line. Our measurements are in excellent agreement with computational results; unambiguously demonstrating the quantitative capabilities of the technique. UHV-SThM techniques will play an important role in the study of energy dissipation in nanometer-sized electronic and photonic devices and the study of phonon and electron transport at the nanoscale.
Keywords: scanning thermal microscopy . ultrahigh vacuum . quantitative temperature profiling . nanoscale thermal contact . thermocouple probe