Abstract
Ultrafast control of current on the atomic scale is essential for future innovations in nanoelectronics. Extremely localized transient electric fields on the nanoscale can be achieved by coupling picosecond duration terahertz pulses to metallic nanostructures. Here, we demonstrate terahertz scanning tunnelling microscopy (THz-STM) in ultrahigh vacuum as a new platform for exploring ultrafast non-equilibrium tunnelling dynamics with atomic precision. Extreme terahertz-pulse-driven tunnel currents up to 107 times larger than steady-state currents in conventional STM are used to image individual atoms on a silicon surface with 0.3 nm spacial resolution. At terahertz frequencies, the metallic-like Si(111)-(7 x 7) surface is unable to screen the electric field from the bulk, resulting in a terahertz tunnel conductance that is fundamentally different than that of the steady state. Ultrafast terahertz-induced band bending and non-equilibrium charging of surface states open new conduction pathways to the bulk, enabling extreme transient tunnel currents to flow between the tip and sample. 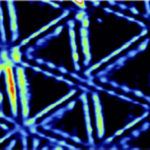 Figure 2 | Charge density wave (CDW) transition in MTBs. (a) STM images of a single MTB at low temperatures (120 K) exhibit three times the periodicity than the atomic corrugation imaged at room temperature. In (b) a larger scale low-T STM image and the corresponding cross-section along the indicated MTB is shown that measured the periodicity of the CDW as B1.0 nm. The schematic in (c) illustrates the relationship between CDW period and nesting vector q = 2kF. Also the opening of a band gap at kF is illustrated. Temperature dependent resistance measurements, shown in (d), indicate two CDW transitions. The transitions at 235 and 205 K correspond to incommensurate and commensurate CDW transitions, respectively. Depending on the applied bias voltage we also observe a drop in resistance below the CDW transition temperatures, which is attributed to CDW-sliding. The inset shows the control measurement on a bare MoS2 substrate and shows no transitions.

Material line defects are one-dimensional structures but the search and proof of electron behaviour consistent with the reduced dimension of such defects has been so far unsuccessful. Here we show using angle resolved photoemission spectroscopy that twin-grain boundaries in the layered semiconductor MoSe2 exhibit parabolic metallic bands. The one-dimensional nature is evident from a charge density wave transition, whose periodicity is given by kF/π, consistent with scanning tunnelling microscopy and angle resolved photoemission measurements. Most importantly, we provide evidence for spin- and charge-separation, the hallmark of one-dimensional quantum liquids. Our studies show that the spectral line splits into distinctive spinon and holon excitations whose dispersions exactly follow the energy-momentum dependence calculated by a Hubbard model with suitable finite-range interactions. Our results also imply that quantum wires and junctions can be isolated in line defects of other transition metal dichalcogenides, which may enable quantum transport measurements and devices. 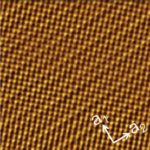 Multiple charge density wave states at the surface of TbTe3

FIG. 1. (a) At left, the crystal structure for TbTe3 with a black rectangle outlining the unit cell. The dotted line indicates the a-c cleave plane between the double Te layers. At right, the square lattice of the Te layer which is exposed by cleaving as well as the locations of the closest Tb ions in the rare-earth block layer directly below. The unit cell is again shown in the structures at right for reference. The crystal structures were constructed using Vesta software. (b) Topographic image taken over a 90 A ̊ square region at I = 65 pA, VSample = −350 mV. The Te square lattice of the exposed surface can be clearly seen as well as superimposed “stripes” associated with a unidirectional CDW state along the a1 crystal axis.

We studied TbTe3 using scanning tunneling microscopy (STM) in the temperature range of 298–355 K. Our measurements detect a unidirectional charge density wave (CDW) state in the surface Te layer with a wave vector consistent with that of the bulk qCDW = 0.30 ± 0.01c∗. However, unlike previous STM measurements, and differing from measurements probing the bulk, we detect two perpendicular orientations for the unidirectional CDW with no directional preference for the in-plane crystal axes (a or c axis) and no noticeable difference in wave vector magnitude. In addition, we find regions in which the bidirectional CDW states coexist. We propose that observation of two unidirectional CDW states indicates a decoupling of the surface Te layer from the rare-earth block layer below, and that strain variations in the Te surface layer drive the local CDW direction to the specific unidirectional or, in rare occurrences, bidirectional CDW orders observed. This indicates that similar driving mechanisms for CDW formation in the bulk, where anisotropic lattice strain energy is important, are at play at the surface. Furthermore, the wave vectors for the bidirectional order we observe differ from those theoretically predicted for checkerboard order competing with stripe order in a Fermi-surface nesting scenario, suggesting that factors beyond Fermi-surface nesting drive CDW order in TbTe3. Finally, our temperature-dependent measurements provide evidence for localized CDW formation above the bulk transition temperature TCDW.

November 27-December 2, 2016 Boston
MRS Fall 2016
The Conference will be held at the Hynes Convention Center in Boston, Massachusetts
http://www.mrs.org/fall2016/