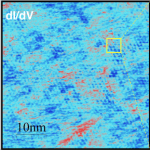 Figure 1:  The sample is graphene grown on SiC by Joshua Robinson’s group at Penn State. The image is a large scale (50nm) high resolution (2048px) simultaneously collected dI/dV and topo image. Taken at 200mV and 0.1nA. dI/dV setting is 10mV excitation at 1kHz. The Moire pattern is clear in the main image, while the zoom shows atomic resolution.

Graphene grown on SiC is one of the most promising routes for producing large-scale graphene devices and heterostructures. Here we studied topography and variations in local density of states of graphene grown on SiC by Joshua Robinson’s group at Penn State.  This characterization of the base graphene growth is in preparation for developing work that aims to understand the local electronic states across graphene heterostructures. The figure shows a large scale image (50nm) taken at a high resolution (2048px) and a simultaneously collected dI/dV map (at 200mV and 0.1nA) from Shawna Hollen’s group at University of New Hampshire. The large scale image shows a superposition of a Moire pattern and electronic variations, while the zoom shows details down to atomic resolution. 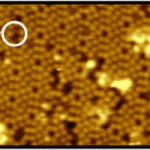 The site-specific locations of molecular oxygen reactivity on Si(111)-(7 Å~  7) surfaces were examined using kinetic energy selected supersonic molecular beams in conjunction with in situ scanning tunneling microscopy. We herein present a detailed visualization of the surface as it reacts in real-time and real-space when exposed to molecular oxygen with translational energy Ei = 0.37 eV. Atomically resolved images reveal two channels for oxidation leading to the formation of dark and bright reaction sites. The darks sites dominate the reaction throughout the range of exposures sampled and exhibit almost no preference for occurrence at the corner or inner adatom sites of the reconstructed (7 Å~  7) unit cell. The bright sites show a small preference for corner vs. inner site reactivity on the reconstructed (7 Å~  7) unit cell. The bright site corner preference seen here at elevated kinetic energies and with selected incident kinematics is smaller than that typically observed for more conventional thermal (background dosed) oxidation processing. These observations suggest that two adsorption pathways, trapping-mediated chemisorption and direct chemisorption, occur simultaneously when using energetic molecular oxygen but with modified relative probability as compared with thermal dosing. These results demonstrate the efficacy of using angle- and energy-selected supersonic molecular beams to gain a topographical diagram of the accessible reactive potential surface energy and precise control of semiconductor oxidation, a process that is of growing importance as we seek to create high-quality and precisely defined oxides having atomic dimensions.